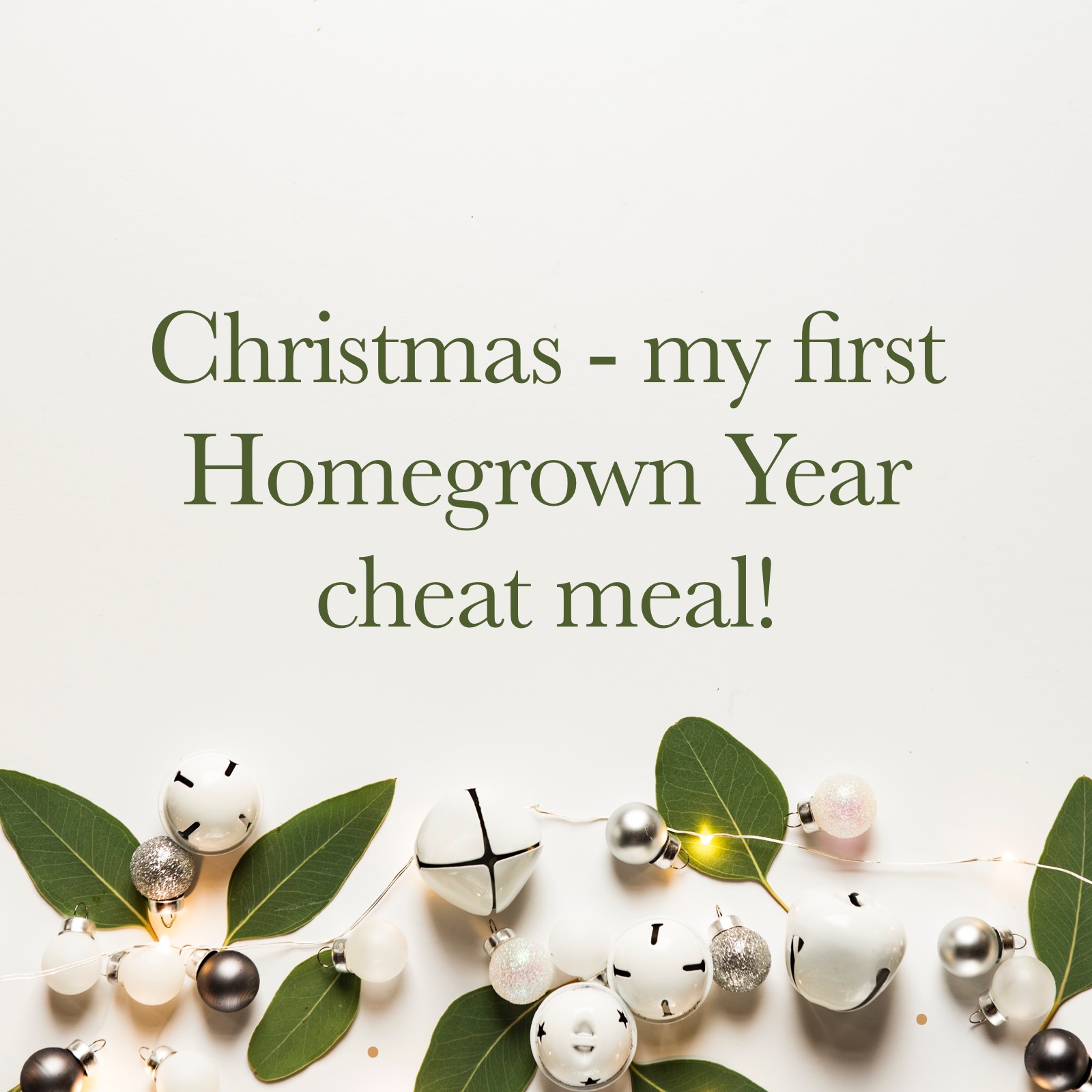 If you’ve been following the Homegrown Year challenge, you know that I’m allowed four cheat meals for the entire year. I want to keep a backup feast or two as a ripcord if I start to crack, but made it almost five months without a cheat. It’s only cheat meal and not a cheat day so I clarified the rule in advance. As long as I didn’t stop eating, a long, grazing meal counted.

What better day than Christmas to celebrate by eating everything I could desire in a single meal? I announced to my husband, Mark, Christmas would be the first cheat meal of my challenge. He excitedly embraced the challenge of cooking or procuring all my favorite foods with gusto.

Mark compiled his elaborate Christmas menu yet. In the past he made a full cajun-themed dinner one year that took almost a week of prep work. We had, and I am not joking about this: raw oysters, grilled oysters with a special sauce, smoked salmon dip, anchovy-stuffed olives, shrimp, smoked pork belly with a maple glaze, paté, pheasant sausage, two kinds of caviar, artichoke and tomato salad, king crab, Mark’s special cottage cheese (it’s my favorite), a New York roast, and an entire tiramisu cake.

As if that wasn’t enough food, I even one-upped him. Mark spent much of December talking about this Serrano ham display kit he’d seen at Costco but declined to buy on account of my challenge. It was “”the ham that got away. He thought it would be cruel to have a perfectly cured ham on display while I couldn’t touch it. For weeks he lamented not buying it. Of course, Costco quickly sold out. After looking for the ham at every Costco in town, I special ordered him a ham and display cutting stand of his own to open on Christmas Eve.

Mark opened it with the sparkle of wonder in his eye that’s reserved mostly for young children when presented with Santa’s bounty. Meat does that for him.

So, we had the entire meal AND a massive ham on a stand in the middle of the kitchen table. Why not?

I planned to enjoy cocktails most of the day on Christmas. Because of my friend, Allison, I have access to some spectacular wine for the year from California. However, that’s the only alcohol I’ve had so far since the challenge started. I was ready for some liquor. It made sense to dive in with an amaretto sour in a champagne glass. As the first sugar in almost five months, it was so sweet I puckered as if eating a raw lemon. The back of my palate almost ached with the taste. Although it’s one of my favorite cocktails, I couldn’t finish it.

After the amaretto, I tried just a vodka soda. I thought I was going to die. A good martini has always been my go-to but that was almost unthinkable. Apparently, retoxing after detoxing is not something that can’t be done suddenly. I spent the rest of the day slowly sipping on a nice sparkling rosé, and then drinking beer. So much for being a cocktail person anymore.

Overall, I ate my way through the day and drank less than I had planned – but it was a great cheat. With all the delicious seafood, I made my best orca impression, which was a nice way to take a meal away from zucchini. The flavors were spectacular. Even with so many options at my disposal, though, my body propelled me to the simplest things. I just stood over the cocktail shrimp and shoveled. By the time we got to the crab I could barely butter it, so I just ate the sweet meat. It was perfectly grilled. Both my body and my palate have changed in the last five months.

This was supposed to be a reprieve from the simplicity of my everyday fare, but I am not getting to the point where I actually crave exactly what I have.

I also realized that I don’t actually like the feeling of being overfull. Maybe it’s just because everyday I eat mostly as much as I want in volume, but of very “clean” foods. By the time I got to the tiramisu I didn’t even really enjoy it that much.

The next morning I could do little else but lay around and go to bed early. It was like my body woke up and yelled at me “WHAT THE HECK WAS THAT?!?!” I didn’t drink that much, but it felt like a hangover. It was a beautiful meal, and so worthwhile, but it’s a rarity, and probably better that way.