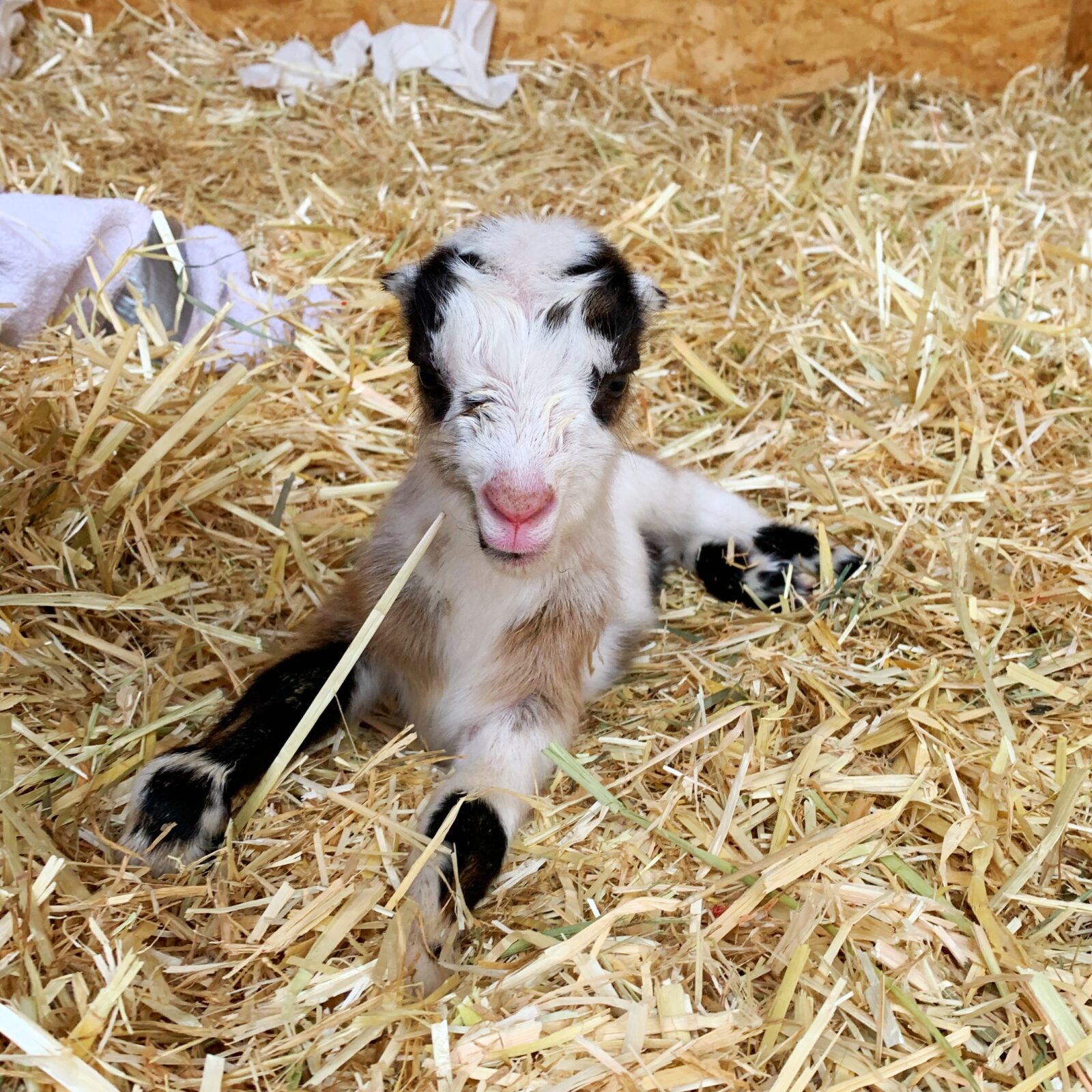 After adding new babies to the mix here in recent weeks a theme has emerged. None of them have ears. They are all cute, but what’s up with the lack of lobes?

Internet people started sending questions – as they do. Do I dock them the same way some people dock the tails and ears of some dogs? People had heard of disbudding (dehorning) goats before, but did I sign up for a ? Is it for aesthetics? Am I a cruel goat overlord who took shears to the top of their poor little heads? Nope. Just like Lady Gaga, they were born that way.

Unlike the most common miniature goat breed for milk, the Nigerian Dawf, I have gotten into breeding Miniature Lamancha goats (here we call them mini-). They have naturally tiny to basically non-existent ears. With a sleek, almost dancer-like appearance, long graceful lines, a loving personality, and amazing milk – I them.

I started off with Nigerian Dwarves (check with your zoning, fencing, and the state of your marriage before trying this at home) which is the most common kind of homestead milk goat. I was thrilled with but didn’t fully appreciate what I was in for. Outside of a lot of reading, online research, and of goat’s milk I didn’t know what would be right for me and our family. Some things you just have to learn by doing – goat ownership is one of those things.

Then, a few months into the process of having our small goats, we got a goat boarder. We found a woman who keeps milk goats but lives in a normal suburban home, so she boards her herd on other’s land the same way some people board their horses. She also makes goat lotion. Cool hobby.

Unlike me, she has legit dairy goats. Big ones. These aren’t the same as the little goats you see in viral videos or the ones I have. Her goats are basically like mini-cows. They can give a gallon of milk a day. They’re hardcore and for people who need enough milk for their entire or even several families.

Two of her big dairy does are American Lamanchas. Lamanchas are a breed that was developed in the U.S. of Spanish goat stock and they’re best known for their distinctive ears (or lack thereof). Ears aside, they were bred for their hardiness and consistent milk production in varying conditions, their fabulous temperament, and the relatively high butterfat content of their milk for a dairy breed. As soon as I met these sweet girls I fell in goat-love. However, I don’t want giant legit dairy goats, at least for now. Minis are plenty of goat for me.

All I really want is enough milk for my morning coffee and to make some cheese for my child who could literally subsist solely on that. I’m not at the point where I’m looking to make cheese to sell, make my own lotion, or sell milk – any of the activities that require the serious volume that comes with dairy-sized goats.

Unless you want a ton of milk, mini goats are the way to go. They eat less than their dairy counterparts, they’re better for lap sitting, and their milk is (in my opinion) yummier. As a general rule, the smaller the goat, the higher the butterfat percentage of their milk. Butterfat is what gives it and delicious flavor. Nigerian Dwarves, for instance, have a butterfat percentage that is anywhere from 2% to 3% higher than their volume-producing counterparts.

So, here I am loving the temperament, udders hardiness of the Lamanchas, but also loving the small footprint, reduced appetite, and high butterfat content of the milk from the Nigerian Dwarves – enter mini-.

After some research, I learned there have been breeders for years who have been cross-breeding dairy goats with minis in an attempt to get the best attributes of both. Miniature Lamanchas have all the best things from their larger dairy versions, but also eat less and offer creamier and tastier milk.

Because mini- were created by combining Nigerian Dwarves and Lamanchas, the offspring of my Nigerian does – Foxy and Copper – with a registered mini- buck will be registerable mini- kids. They’ll just have a higher percentage of Nigerian and lower percentage of Lamancha than their Dad.

So, this year I acquired one mini- doe, and bred both her and my Nigerians to our mini- buck – and now we have four beautiful earless babies who bring all the attributes I wanted in a mini dairy herd to the table.

Goat lattes, chèvre, and feta for all!

2 thoughts on “Did you cut your goat’s ears off?”