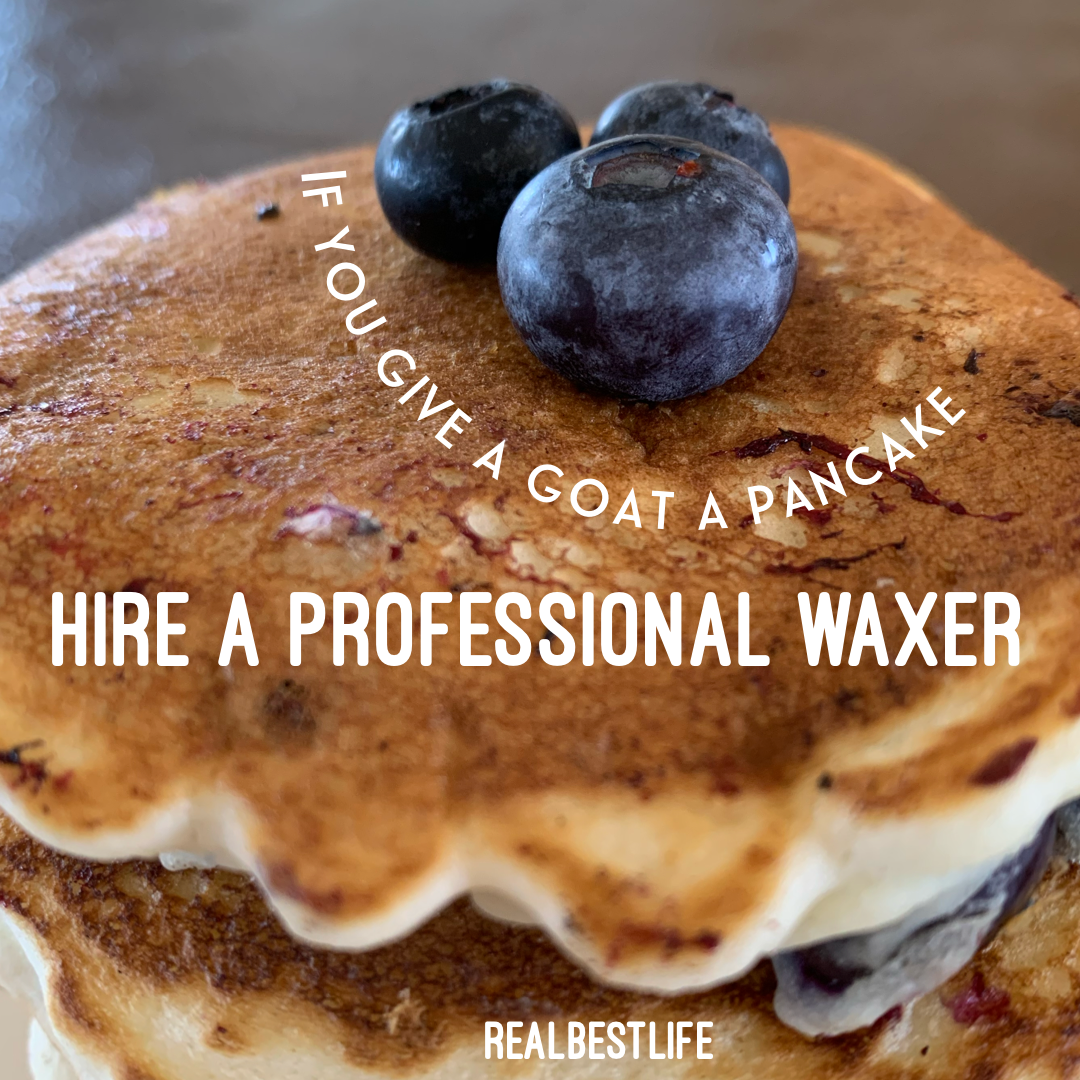 Not all days on the little farm go as expected.

Yesterday, for instance, was like something straight out a National Lampoon movie. It’s a bit of a twisty story to get there – so stick with me.

So many predicating factors went into me literally and accidentally tarring and feathering myself:

Last week our buck goat, Patches, came home after a month of vacation where his job was to “service” does at another farm. After a buck does his job, the owner of said buck fills out a “service memo” to present to the owner of the does for the registration of the resulting kids. Seriously. I am literally a pimp now.

Upon his return home, Patches had to be moved down in the far pasture by all the ducks and chickens. All our girl goats are together in the upper pasture and there are some does in our herd who are either already pregnant or who aren’t yet ready for servicing, so Patches spends most of the year across the property from our does.

Patches is such a sweet boy, and I love to take him little treats and spoil him. None of the rest of our goat operation would function without his “contribution.” Although he’s not alone in the far pasture, he doesn’t get as much socialization as all the rest of our herd so I single him out for special love.

A few days ago I had some leftover pancakes from a batch we’d made. I smeared one with peanut butter and took it down to him for a little snack. I could have sworn it was his personal goat heaven.

Patches enjoys playing and rearing. Although he is always funny and gentle with me, he’s also very strong for his size.

Then, yesterday I decided the brief overlap where both sons were napping would be the time to attempt to wax my legs. For the first time ever I attempted to DIY the procedure. In the past I have always paid a professional, but the kit was only $12 at Walmart. I’m trying to be more frugal this year and how hard could it be, right?

As I was microwaving the wax a neighbor stopped by with a large box of lettuce for our chickens. He had procured 40 pounds for his own flock to help overcome the mid-winter greenery lull and offered to share. It was such a neighborly gesture and my chickens appreciate the variety, as they have been molting. There are mounds of snowy looking feathers strewn all over their pens and the pasture.

As soon as I thanked him and he left, I changed into a pair of shorts to get the waxing underway. The clock was ticking. I was down to maybe 10 minutes with both boys asleep, if I was lucky.

Anyone who has tried to wax themselves probably knows it’s not a good idea to try it under the gun. That said, with two boys under three, all self-care has to occur in short spurts during the magical time they are asleep simultaneously.

So, I slathered the wax on the first leg with the enclosed popsicle stick, pressed the sheet onto the wax, counted to three, and tried not to flinch as I tore it upward.

Amazingly, I managed strip the skin off while also leaving the spot covered with both hair and a sticky wax residue. It defied comprehension. At this point, though, I was committed. Maybe the next slather and yank would be more fruitful. Nope.

I heard the baby start to stir and felt the panic of an asymmetrical, (and exceptionally subpar) waxing job coupled with a huge box of lettuce calling to me. I knew I had to get him before his cries would wake his brother.

I scooped out the remainder of the now too-cool wax and gooped it onto the other leg in the hopes it could make it marginally even-ish. As I pulled back on the strip I saw the blood start to drip from my calf.

By this point the baby was just on the edge of fully awake. I had a large box of lettuce on the kitchen island wilting by the second, was wearing shorts, bleeding, and was starting to feel a little light-headed. I had maybe five minutes until a full baby-meltdown, and needed to get in the shower to remove the wax residue off my lower extremities.

First thing first – I spread a little peanut butter across a piece of bread and wolfed it down in an effort to quickly stabilize my blood sugar before attempting Momming. This left just enough time to run down to the chickens and toss the lettuce to them, as I wouldn’t want to after the necessary wax-removal shower.

In my shorts and a pair of garden boots I carried the box of lettuce down toward the chickens. The wax cemented my ankles awkwardly to the inside of the boots and forced me into an unnatural duck-march to the gate.

Once I entered the lower pasture with the large box of produce balanced precariously in my arms, Patches, who smelled peanut butter on me, assumed I must be there with special treats to play with him. It never occurred to me that going down smelling like peanut butter would send him that message, because apparently I’m an idiot.

He reared up and playfully butted the box with his head. At that exact moment, the pressure of the awkward stance forced my ankles and lower legs to release their glued-on grip from the boots. The whole exercise sent me toppling over into a pile of feathers.

I stood up and brushed myself off.

Once I walked back inside and caught sight of myself in the mirror, it was impossible to stop laughing. Feathers were plastered to my skin with discount wax mixed with a little blood. I was fully tarred and feathered as if I had been caught robbing a King or had ratted colonial smugglers out to the British army.

The baby was fully awake and in the process woke his brother as well. “Momma, you ok?” my sweet older son asked. “Not just yet, but I will be. I just need to make a professional waxing appointment.”

7 thoughts on “If you give your goat a pancake, hire a professional waxer”