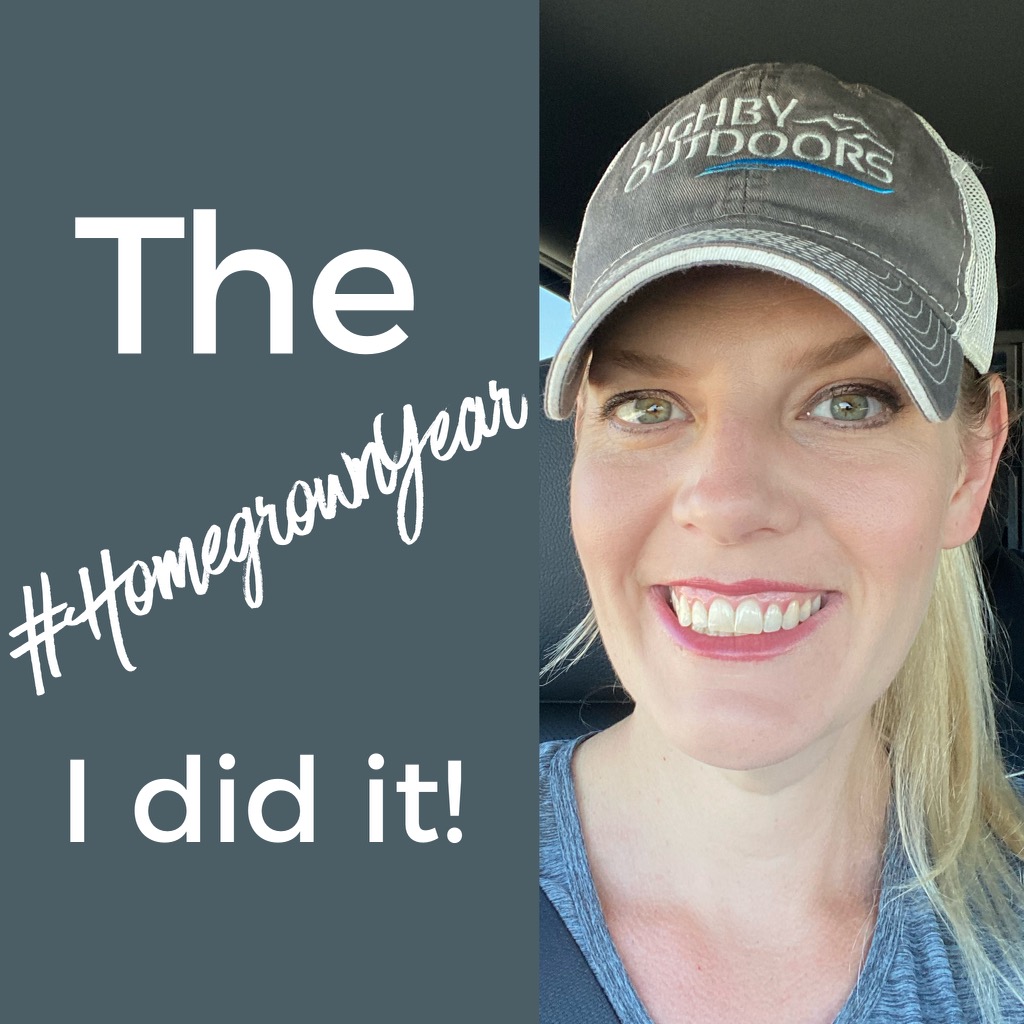 First, some numbers –
Total weight lost: 82 pounds
Chickens slaughtered by humans: 21
Chickens murdered and eaten by pigs: 7
Zucchini zoodled and frozen: +/-250 pounds
Tomatoes canned: +/- 750
Deer shot by Mark: 2
Pigs who died of natural causes: 1
Pigs who were slaughtered and consumed: 1
Freezers that were full of meat and turned off by toddlers who snuck into the garage and flipped the switch: 1
Greenhouses built: 1
Greenhouses actually utilized: 0
Goats purchased specifically for the challenge: 2

Welp, I did it. I just successfully completed the Homegrown Year Challenge. If you haven’t read or heard about it, one of my best friends challenged me to live off what we produce on our small urban farm (including what we hunt and fish elsewhere) for an entire year. I started August 1, 2020, and as of July 31, I did it.

First off, I did it. I’m not someone special or uniquely talented at this kind of thing. Besides starting with a slightly greater than average love for gardening, some goats and chickens, and the type of reckless stubbornness for something so bizarre, there’s no real reason this would be the kind of thing I would or could do. I didn’t grow up on a farm or go to school for agriculture. It’s just a hobby, a hobby that has now fed me for an entire year.

For those who are here solely for the upshot – I lost a total of 82 pounds eating a LOT of goat cheese, meat (mostly deer), eggs, and veggies. Physically and emotionally, I feel healthier than I can remember since childhood and now have a completely different view of life, food, and health. Not that I want to sound like a crossfitter trying to evangelize and make you come with me to pick up tractor tires in the parking lot behind a strip mall. The Homegrown Year was THE HARDEST possible way to lose weight imaginable. Not everyone should do it, but also, if I can do it, anyone can.

Like many great things, it started as a crazy dare fueled by wine. My friend Emily and I were on a wedding trip in Napa, CA, with many beautiful local meals. But everything served brought my mind back to the small-batch foods we make on our small urban farm. All the cheeses were delicious, but I had to mention MY cheeses. The produce was fabulous, but the veggies I was growing were so special, and on and on. I don’t know if Emily dared me to live off my farm to shut me up or out of intrigue – but after her suggestion, we spent the remainder of the weekend mulling over this very odd but fascinating idea. Could I do it?

That wedding was in August of 2019. I gave myself almost all of 2020 to prepare. Our garden quadrupled in size, we had a greenhouse and a “poultry palace” built. We added new, bigger producing milk goats to the herd. I submitted a list of “rules” to the “rules committee” (my husband and Emily), and we hammered out the details.

By the way, there’s no way I could have done this without my husband, Mark. When confronted with a wife explaining why she wants to live off their small urban farm for a year, not many husbands would enthusiastically embrace the idea. He jumped in, and although he and our sons didn’t join in the challenge themselves, Mark was the main source of meat (HA) and lovingly prepared Homegrown Year-compliant meals. There’s no question part of the upside for him was that he could now argue hunting and fishing trips were “for me,” but deer was my primary source of protein.

I announced my intention to try this weird thing in January of 2020, and once writing it out loud, I was committed. Despite the pandemic (and sometimes because of it), we kept preparing. On August 1, 2020 – I started. The first days and weeks were HARD. I had planned to wean myself slowly off caffeine and junk food but never quite managed it. Every day I thought, “well, I can start preparing my body tomorrow.” Yet, time marches forward, and all of a sudden, it was the day before. It was like preparing for a marathon by not running.

I got sick. Very sick. I’ve never been in a physical withdrawal before, but I was experiencing all those symptoms. Headaches, shaking, an inability to think, exhaustion, and nausea punctuated the first few weeks. Although I had a few chickens frozen at that point, Mark hadn’t yet shot a deer, so I was on almost entirely fresh veggies from the garden. I went overnight from a coffee, wine, and cocktail drinking garbage eater to eating only fresh veggies, eggs, cheese, and drinking water. Although it sounds great, the constant pounding in my head reminded me that I had approached this wrong. So wrong.

It was a rough start but got better with time. I also started to utilize the bartering provisions in the rules to get some of the items I couldn’t produce myself. One of the first lessons underscored by the Homegrown Year was that although it is possible to go it alone, it sucks. No man is an island. The number of people across the country who supported me in this weird endeavor is the most humbling part of it.

People supported me by growing things, fishing, hunting, raising animals, picking, canning, fermenting, pickling, scavenging, tapping maple trees, and shipping boxes all over the country. Individuals I have never met put boxes in the mail to me; I was amazed. Others supported me by facilitating introductions to producers, sharing my crazy story, texting or tweeting me words of encouragement, or even just meme farming (we have a rowdy Facebook group – join it.) One of my besties, Matt, came for the start of the year with cameras in tow to make videos and take photos. Friends in media and those with constituencies of their own told their friends, wrote beautiful pieces, suggested my email newsletter, or had me on their shows. The kindness and support of others was overwhelming.

The #HomegrownYear was conceived as a kind of self-reliant challenge that managed to underscore how much life is really just a team sport.

I did an interview early on with my friend, Guy Benson (at whose wedding this whole idea hatched) and a coffee grower in Hawaii named Bill Martin (visit his site and buy things here) heard the interview. He contacted me and offered to send coffee. After nearly a month sans the magical beans that fuel my life, it was almost a “tears of joy” moment at the mere prospect. Although Bill isn’t a huge goat cheese fan, he still sent a box that contained coffee, chocolate, and some dried pineapple. There are strict restrictions on what can be mailed to Hawaii, no produce, so he accepted my paltry freeze-dried cheese offerings. I remember the moment I saw the box from Hawaii on our front porch. It felt like Christmas morning felt at 5-years-old. Santa is real, his name is Bill Martin, and he lives in Hawaii.

As it went on, more people heard about the challenge, and the food diversified, but the base ingredients mainly stayed the same throughout. Zucchini grows well in Colorado and is a neutral, easy to store, and bulk-adding vegetable. There are many ways to keep zucchini, but I found “zoodling” (spiralizing) it, squeezing out the excess liquid, vacuum sealing, and freezing it to be the best way to store the massive quantities I had to put up to survive. With the zucchini, I tried freeze-drying chips, fermenting it, and even dehydrating it – but just the frozen zoodles seemed to work best.

Friends joked that the challenge was more of a “zucchini cleanse” than anything else, and they weren’t wrong. Although the start was a shock to the system, the challenge was underway at a good clip once I got over the initial pounding in my head, exacerbated by days of self-doubt. I had no idea what struggles were to come.

2 thoughts on “The #HomegrownYear – Part 1 – Starting the thing”