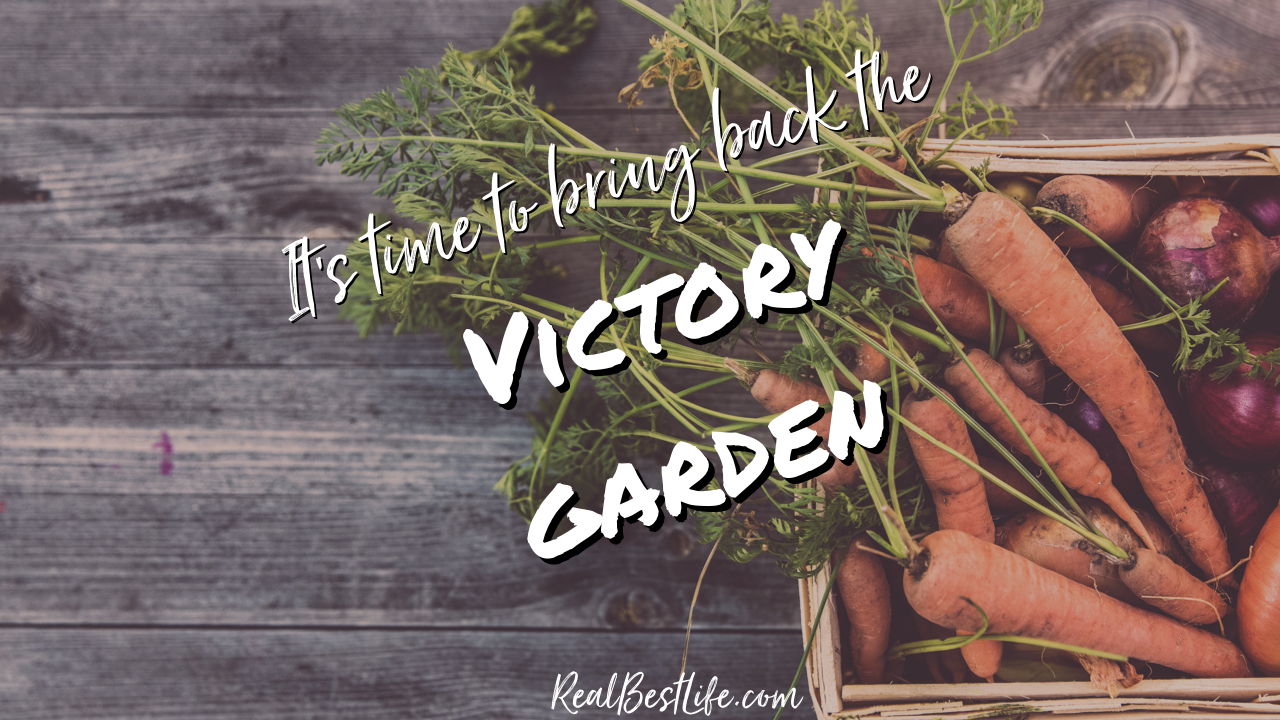 It’s time for Victory Gardens to come back into fashion. Immediately.

If you’ve never heard of a Victory Garden, you’re not alone. Victory Gardens, household vegetable, herb and fruit gardens, started to appear during WWI but became a widespread phenomenon in the midst of WWII in the allied countries.

As food was rationed during wartime, families were encouraged to start vegetable, fruit, and herb gardens at home. This helped to relieve pressure on supply chains, feed families and send more rations to the troops. They also served as critical “morale boosters” to families back at home. Victory Gardens allowed even those who weren’t fighting to have a purpose, some self-reliance, and a job creating something both useful and delicious.

Imagine the aggregate impact we could make if every person planted just a single edible plant. Or if each us made the goal of growing enough this year for just a single meal. It would be staggering.

A Victory garden for your mind and soul

The mental health benefits of gardening are well-documented. The art of starting a garden, however small, requires the practice of both ceding and taking control of a situation simultaneously.

In times of stress, a tangible goal as simple as growing basil can give the grower the gift of momentum. However small the undertaking, from seed to consumption, there is always a next step.

Plants don’t care if you’re in a if you’re behind at work or with the rent, or even if you stayed up all night drinking a bottle of wine watching Tiger King – if you give them soil, water and light they will find . Even the most basic gardening allows us to take a few minutes away from the daily grind to marinate on the overwhelming beauty and improbability of life.

It sounds trite, but bearing witness to the almost magical process of roots emerging from and sprouting forth into a plant can offer a  perspective. When we open a jar of marinara from the shelf it’s not often that we contemplate the complex interplay of air, soil, water, and light that sustained a single tomato before dumping the sauce on some pasta. If we’re growing our own tomatoes that same jar takes on a wildly different value.

There is nothing like growing something yourself to open your eyes to how much plenty we enjoy today. The rote way we go through supermarkets filling baskets with food from all over the world is astounding. It’s easy to forget the immense work of farmers, ranchers, preservers, packagers, butchers, canners, truckers, grocery stockers, and checkers that go into even the simplest meal.

We forget about these heroes, not out of malice, but because our current world is so insulted from them. They’re the people who will keep us fed throughout these challenging times.

A few months ago I told a legit farmer™ (I don’t put myself in this category) about the Homegrown Year challenge. He mentioned to me how he wished more people would try to grow at least a little of their own food. He felt he could better relate to those who know “what it’s like.” It isn’t until you’ve tried to grow something of your own that the immense frustration and intense gratification seeps in. Until you’ve done it it’s hard to explain.

Gardening is a constant confrontation of the fragility of life. Although gardening is portrayed in media as a hobby primarily suited to newly-retired women in their mid-sixties who enjoy bunko, quilting, floppy hats and probably have a punny wine sign hanging somewhere in their kitchen, it’s actually a brutal sport.

If you garden, you will kill a plant. You will likely kill many plants. The best gardeners I know are those who have the highest capacity to kill something, till it under, learn whatever lesson from the death, and do it differently next time. A good gardener just plants it again and again. Part of the stunning beauty of life is that there is always next season. The marginal adjustments determine success, but you can’t improve upon something you’ve never started.

A green thumb is really little more than a high threshold for involuntary herbicide (the verb, not the noun), an assessment of failures, and an ability to adjust next time. The most important thing is to not give up and ensure there *IS* the next time. Try again. And again.

A Victory Garden for deliciousness

There’s a reason that even before people started to seriously think about food scarcity and security that becoming a locavore and “farm-to-table” became en vogue. Access to food from around the world is great, but there’s something uniquely delightful about taking a bite of something you created from “scratch scratch” – from seeds, water, dirt, and sun.

So, try it. If you’ve never planted anything before try just one plant. You can do it. It’s worth it.