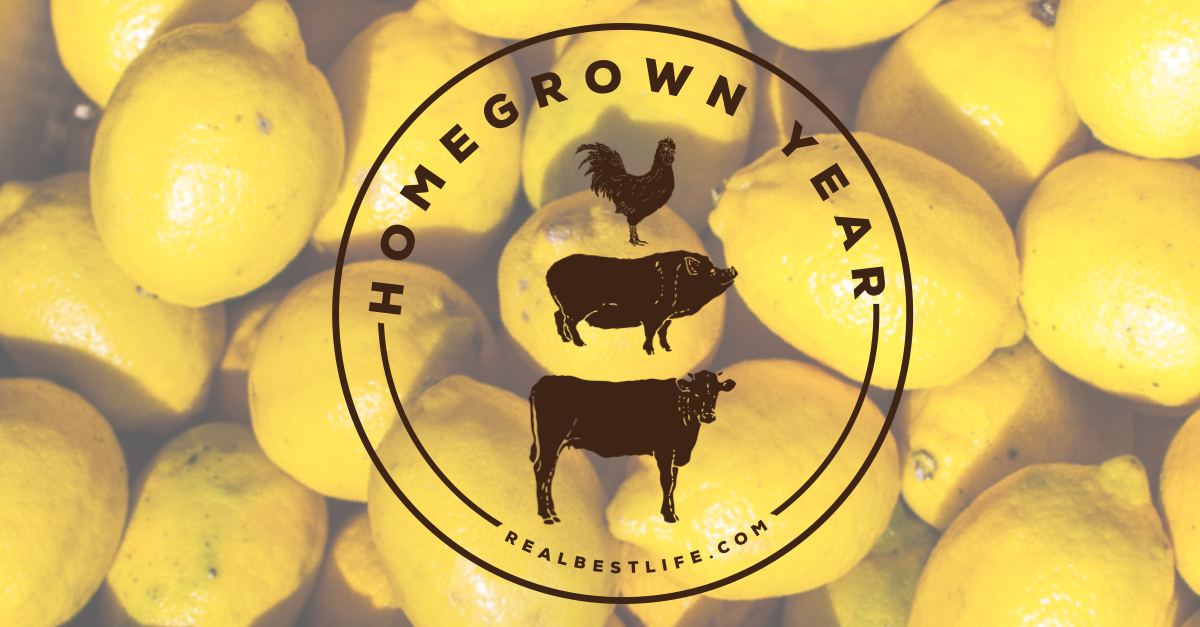 I published the intro post on the Homegrown Year. Although there’s been prep work happening in the background, hitting the “publish” button felt like a huge step. (Sign up for my newsletter to hear about how it’s going)

The first post was only live for a few hours when I called my brother, Gregory, to check-in. He lives in Arizona but we still talk several times a week. He informed me the conversation would have to be short because he was driving over to my Aunt and Uncle’s house a few miles away.

The oranges and lemons on the trees in their backyard were fully ripe and they had a huge year. Gregory was heading over to pick what was left. In our entire lives, he’s never gone to pick produce, so the fact this call occurred right as I had announced the project felt like a jolt to action.

What seemed like a fun activity for him sent me into an immediate state of anxiety. I knew that in order to have citrus for the Homegrown Year I would have to barter for it. Yet, for some reason, I never considered citrus would need to be in season in order to obtain it. It’s common sense, I just hadn’t thought about it.

We’re so conditioned by shopping at the grocery store where there’s access to perfectly ripe fruit year-round we don’t think about the seasons. It just hadn’t occurred to me that in 3 or 6 months when I want them, oranges might not be in a state to be picked. It’s an importt reminder to get things when they’re available, not just when I want them.

I must procure all the citrus I’ll need to stave off scurvy from August 1, (my year start date) until they’re ripe again starting In January 2021. Next January, I’ll once again be able to reach out and barter for more with family and friends (if I can manage to make something they want.) For the five months at the start of this challenge, all my citrus options must be already squared away.

Colorado, as I write this, is blanketed under eight inches of snow. It’s perfectly nice to happily blog about the of the year while sipping tea. However, the lemon situation forced me into the stark realization that I need to move on action items so this doesn’t turn into “the 53,426 ways Kelly makes zucchini.”

The immediate need to secure citrus took this whole project from a fun thought experiment and made it suddenly very real. What did I sign up for?

Of course, Gregory completely understood when I demanded he me everything he picked. Luckily for me, he loves my cheese and supports me in this endeavor – so it wasn’t a tough sell.

After Gregory assured me that I would have at least some citrus for the year – that raised new anxiety. How would I keep it until August? My fruit bowl is full of shriveled lemons and limes that eventually get tossed into the composter.

That anxiety drove me to a 3 am lemon preservation googling session. I’ve made plenty of marmalades and lemon and lime curd in the past – but haven’t yet figured out what I’m going to do about honey or sugar. The lemons and oranges my brother sent are all I have at my disposal along with the few items I know I will be able to access from the rules committee (this includes salt).

One of the simplest ways to preserve lemon, apparently, is to salt it prior to canning – like a lemony refrigerator pickle. The thought of salted lemon makes me want to gag. I’ve never tried it, so maybe it will be better than I imagine. Or maybe not. I could add preserved lemon to chicken, salad dressings, or as a marinade for veggies and meats.

This could be a great way to add some brightness to recipes in the middle of winter. I found a simple preserved lemon recipe here – and am trying it out to see if it would be an acceptable way to use those precious few lemons I can acquire for this week to use for the challenge.

It doesn’t look like there are choices for shelf-stable salted lemon (everything I found requires refrigeration) but if it’s not terrible, I could freeze the salted lemons then defrost them at the start of the challenge so it would last longer than the recommended 6 months.

Other good news: in anticipation of the year, we bought a freeze dryer. I tested it first on apples and bananas, but will certainly see what happens with lemons as well. From what I’ve read, though, they seem to retain more of the stickiness than other fruits that are structured differently.

I could also just peel them and take all the fruit and put it in the blender and freeze it in ice cube trays. Then when I want lemon or orange for a recipe I could just pop out a cube. I could also retain all the rinds and freeze dry just those for when I need them for zests or to add to teas. That would be the option with the least waste of something that will be a scarcity for me. It seems like the easiest solution.

Anyway, clearly, this will require bags of store-bought lemons for experimentation as I want to have a concrete plan of what to do with those lemons and oranges bartered for with precious cheese. Those will be the ones I’m actually able to consume during the year. So, off I head to the store for another bag of “sacrificial lemons” to make sure I have my plan perfected before going near the ones I’ll be able to eat during hallenge.

4 thoughts on “When life hands you lemons – preserve those suckers”