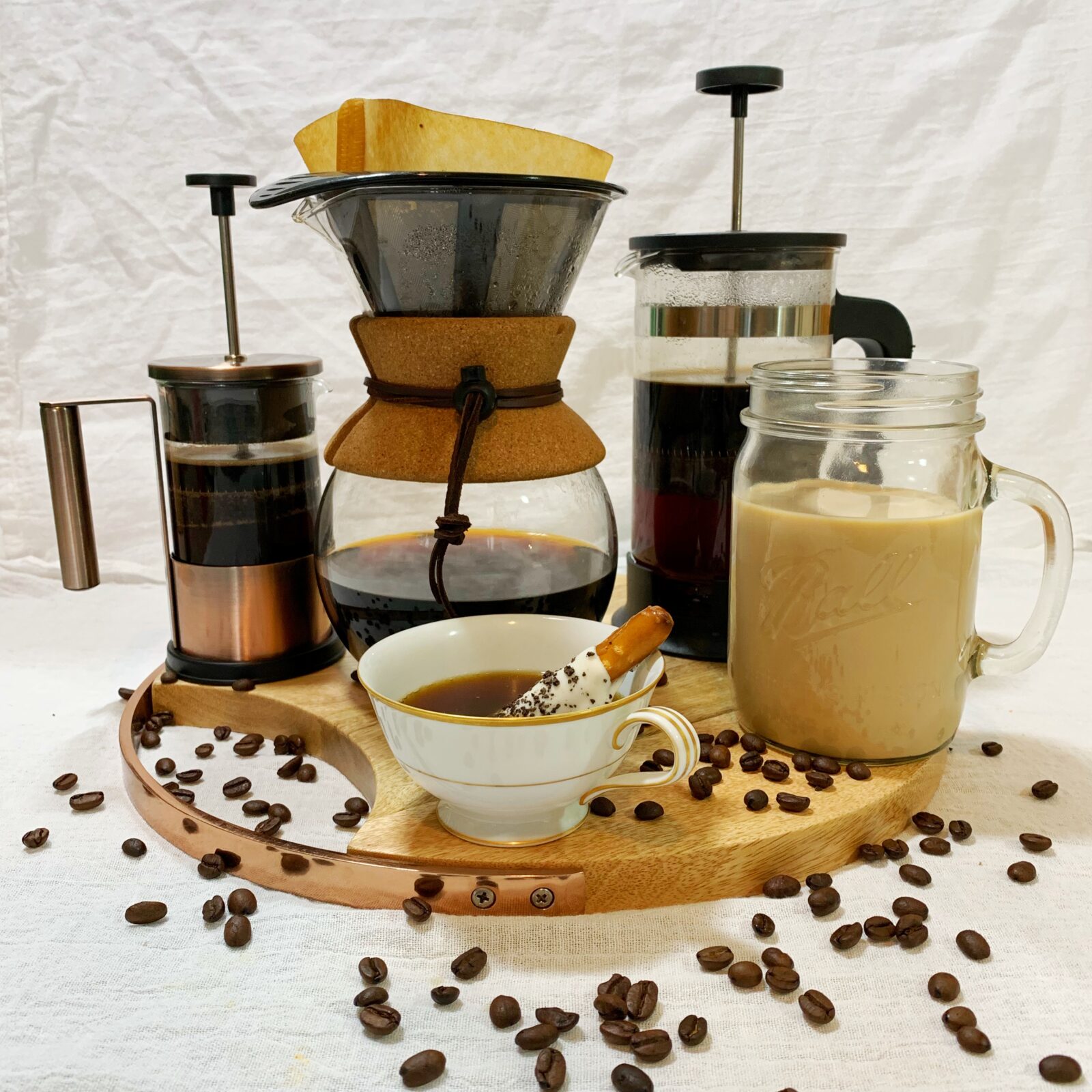 Put the pods down and step away from the machine. No matter how you take it – with milk or cream, sugar, flavor, iced, or black – it’s time to think about the habit you have every morning and what it means to you.

I made a small mindful change in my routine and it’s saving me over $500 a year, reducing a not insignificant amount of my waste, is giving me a better garden, and is making me happier.

I, like you, jumped on the K-Cup bandwagon the minute the first shiny machines went on sale at Costco. Over a decade, and who knows how many thousands of dollars later, I’m growing up and thinking twice.

Millions of people across America wake up every day, stumble to their respective machines, pop in a pod, and depress the top until they feel the satisfying hiss of the punctured foil. They then push the button and wait the 30 seconds for the liquid black gold to fill their cups and jolt them from their bleary-eyed stupor. I had been one of those people for a long time.

Then, I reread (again and again, I need constant refreshers) a book that’s had a transformative effect on my life, “The Power of Habit” by Charles Duhigg. It inspired me to truly examine some of the ramifications and motivations behind my daily rituals.

It’s so easy, once you get into a routine, to take for granted the first thing you do every morning. The 5 am of me is not capable of asking myself, “Why am I choosing to make coffee this way? What are the outcomes in terms of time, convenience, flavor, cost, joy, and my impact on the world around me?”

I can’t do much more than grunt at that time in the morning, much less tell you why I’m making coffee the way I do.

Here’s what I loved about my K-Cup machine: it was fast, convenient, had little to no cleanup and was a mindless operation.

However, there were real drawbacks: the cost of the machine itself was not insignificant, and the cost of daily operation – even with pods on sale – was high. For someone who drinks 4-6 cups of coffee a day, (remember, this is a no judgment zone and I have a baby under two) the waste associated with it was getting ridiculous. Most importantly, it was just a mindless habit – it wasn’t adding anything to my life but a quick shot of caffeine as a jump start.

Yes, the K-Cup machine itself is expensive, usually over $120. With daily use, you have to replace them about once a year.

That cost pales in comparison to how quickly the daily operation costs add up. I used to wait for the Costco house brand coffee to go on sale and would go buy the large boxes of pods in bulk. After years of searching for inexpensive K-Cups, that was the best deal I could find. If you buy those, though, you only get one type and no flavors.

Don’t even get started on Big K-Cup’s attempt to shut down “black market pod makers” by creating the new “2.0” machines that would only accept pods licensed through them. After getting the latest maker I was stuck with boxes of pods incompatable with the new digital machine that gleefully informed of that fact in a message scrolled across the screen.

Even at the cheapest price 30 a pod – I was spending at least $1.20 a day on coffee, but most days cost more because I like to mix up flavors. I calculate my average pod cost at over $2 a day.

Contrast that with ground coffee (or grinding your own). Coffee can vary from bulk ground prices at .17 an ounce to fancy flavored name brand coffee at .45 an ounce. I used to always hit the biggest button on the K-cup machine (10 ounces). To make an average 12-ounce cup of drip coffee requires .75 ounce of coffee. I like mine strong, so I’ll just call those equal for these purposes. So, my average cup of coffee is now .13 – .33 a cup. This means my current coffee program now costs me .83 to $1.03 a day (including a compostable coffee filter).

It may not seem revolutionary, but over the course of a year, I expect to save over $500 by just changing up my coffee routine.

Those little pods add up. Yes. They’re small. I’m not going to be all sanctimonious about using disposable plastic every day, I’m not that person. So, I did the math just for me. I was using somewhere between 1,440 and 2,160 pods a year. ME. Just me. Considering the bulk cases come in a 120 pod size, that’s 12-18 cases worth of pods. That’s not small.

The other thing that put me over the edge on the waste front was composting. I love to garden and years ago started a compost pile after looking at the insane prices associated with bagged compost. My kitchen compost started with veggie peels, eggshells, newspapers and dead plant trimmings. Coffee grounds are GREAT to add to compost. They add nitrogen and break down beautifully.

Here’s my secret shame: my local coffee shop would save me their coffee grounds in a bucket to pick up once a week for my compost, while I was using K-Cups at home. That’s how ridiculous of a person I am.

I had convinced myself I couldn’t possibly make time to actually MAKE coffee, and that idea kept me chained to the K-Cup machine much longer than I should have been. I’m really that lazy.

My French press was only for weekends and brunches. It was a pain to clean, and the few times I used it on weekdays left me with either grounds in the bottom, whatever leftover grounds I couldn’t bop out into the compost were stuck in the sink, or it took so long compared to the ease of the machine it left me with a feeling of panic trying to get out the door.

I failed to consider, though, all the things that took more time with the K-Cup machine. The time spent using the special expensive descaling solution (and eventually vinegar – I mean come on) to descale the whole thing once a month was annoying. The replacement of the water filters needed to be added to my calendar. The filling of the water tank daily takes time. Most annoying was time spent using a safety pin trying to unplug coffee grounds to blow through the top and bottom needles, and at the times it worked, ending up with a cup full of grounds. Yes, it was a great machine when it worked, but it was vexing when it didn’t.

What ultimately pushed me to reconsider the coffee situation, once and for all, was the time I was sitting down with a cup in the morning to Facetime one of my best friends, (a modern-day version of getting together for coffee). Although I knew she had a K-Cup machine, I watched her pour herself a second cup from a French press instead – on a Wednesday. She was on a similar habit-analysis track to mine and we discussed the change.

She was using the reward of objectively better-tasting slow coffee to help make her pick up her kitchen in the mornings. She would pour the grounds and water into the press, then put away dishes while it steeped, and would reward herself with a joy-filled cup afterward. She became happier because she liked what she was drinking better, and her kitchen was cleaner as a result. It was a small change, but it set the tone for her whole day.

I still save the French press for weekends, because I do get annoyed with getting the grounds out of the bottom and cleaning it. It’s a bridge too far for my regular weekday routine

After trial and error, I’ve finally figured out what works for me. I bought an electric kettle for $20, which takes less time to heat up the water I need. I bought a cheap one, but there are a ton of options on the market. Some are quite beautiful. In addition, for the actual coffee, I bought myself a $20 pour over coffee maker.

My morning routine has changed, too.

I found the perfect middle ground for me between the French press and the K-Cup coffee machine with this set-up. I use a coffee filter inside the wire basket with the pour over maker so I don’t have to bop out or rinse grounds. The time from heating up water to coffee in a cup is still less than five minutes. Inspired by yet another of my friends, I turn it into a game to see how many junk emails I can delete in the three minutes it takes to go from turning on the kettle to hot water.

Once I have boiling water, I methodically pour it over the grounds (in the filter) in a swirling motion and watch it drip down. I think about my blessings and in the spicy aroma. It’s such a small ritual, but adding a piece of mindfulness and gratitude sets a new and different tone. It feels like a small celebration every day. There’s something about a K-Cup machine that seems hurried, automatic, and flat. Being an active participant allows a brief moment of presence in the early mornings.

When I’m done I simply toss the coffee grounds and filter in the compost bin (which makes me feel good) and do a quick rinse of the ground-free carafe. I wash it in the top rack once a week. Easy.

Ultimately, this might seem like a lot of over-analysis for the simple act of making coffee in the morning – but if we’ve learned anything about how habits can shape our lives, it’s that small changes can reverberate throughout your whole day.

17 thoughts on “Yes, it’s time to reconsider your coffee routine”